In constant production since 1977 due to unprecedented popular demand, Vandersteen Audio’s Model 2 is among the most wildly successful speakers in history. Well over 100,000 pairs of Model 2s have been sold in that span, a striking number of which are still listened to and cherished every day by real-world music lovers who still believe its performance-driven value proposition is as good as it gets for them. Timeless classics like the Model 2 have staying power because the designer stayed true to a vision. For the Model 2 that is sonic “dimensional purity”.

call us at 9819257839 before you buy to discuss technical suitability.
Category: Loudspeakers
Product categories
ACDFIMNOPRTVW

There are three requirements: You must invent a very good loudspeaker that sells for between $1000 and $2000/pair. You have to make enough of them, over a long enough time, to achieve a certain level of brand recognition and market penetration. And you must create a dealer network of reasonable size, with an emphasis on well-promoted specialty shops. 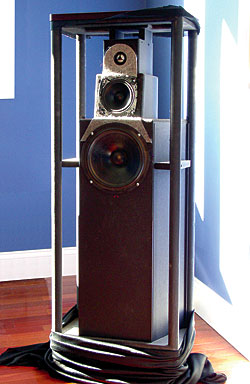 Even so, you’re not out of the woods. Average consumers will think your product too expensive. Hardcore enthusiasts will consider it too cheap. And since your loudspeaker has been on the market for more than a few years—fundamentally unchanged, howsoever refined—you can be sure that no one will ever think it sexy. Like God and Popeye before it, your product simply is what it is.

Think you can do it? Good. Richard Vandersteen could use a little competition. His company, Vandersteen Audio, has been in business almost 30 years, and for most of that time a loudspeaker known as the Vandersteen Model 2 has been his Toyota Camry, his Apple iMac, his Linn LP12. Today, the Model 2 and its variants endure as the most successful American loudspeakers in high-end audio, with close to 200,000 sold.

Description
The Vandersteen 2Ce Signature II of 2007 shows little in the way of outward change: its fabric exterior conceals the same sort of segmented, minimal baffle structure that distinguished early Vandersteens from most of the competition of their day (footnote 1). Now as then, the spare, carefully shaped enclosure is used to time-align the outputs of the three front-firing drivers by ensuring that their wavefronts are launched from the same vertical plane. The design also prevents potentially sound-smearing diffraction effects by eliminating unnecessary surfaces and rounding off sharp edges, thus minimizing early soundwave reflections. It was with that in mind—not the opportunity for physical time alignment—that Richard Vandersteen experimented with limited-baffle designs in the first place.

Alongside time alignment, the Model 2’s other calling card is phase coherence: that quality whereby a loudspeaker preserves not just the relative amplitudes of tones within a complex wave, but also the correct phase relationships between those tones. Just as watts ain’t watts and bits ain’t bits, tones ain’t tones—and Richard Vandersteen has put a great deal of effort over the years into demonstrating, under test conditions, the audibility of phase distortion in loudspeakers where that design aspect has been neglected, howsoever accurate those products may be in other regards.

Although time alignment and phase coherence are interrelated (footnote 2), the two qualities can be realized in different ways. In the 2Ce Signature II, as in all of his speakers, Richard Vandersteen accomplished phase coherence by means of careful crossover design—specifically, by relying on first-order (6dB/octave) filter slopes. Strictly speaking, outside the digital domain there’s no such thing as a phase-perfect filter; they all draw the signal out to some extent, first-order being merely the least offensive of the bunch, with its 90° of phase shift at the frequency where one unit hands over to the other. But through judicious use of signal attenuation and extreme care in choosing drivers, a clever designer can combine two or more first-order filters into a crossover network that is phase-correct overall—and that’s precisely what Richard Vandersteen has set out to do.

Over the years, the Vandersteen 2 has most evolved in terms of driver design, and the 2Ce SigII continues that trend. Compared with its immediate predecessor, the 2Ce Signature ($1549/pair), the new version’s most significant refinement is its use of the same proprietary midrange driver that Vandersteen developed for his Model 3A: a 4.5″ plastic-cone model with a cast-alloy frame, whose English alnico magnet structure is sized and shaped to prevent backwave reflections from impinging on the polymer cone itself. The result is said to be a less colored, more open sound.

The other drivers are similarly purposeful. The tweeter uses a 1″ aluminum-alloy dome covered with a thin coat of ceramic; a molded waveguide is hand-fitted to the front, its position adjusted to suppress the dome’s first breakup mode. The woofer is an 8″ Vifa molded cone with a 2″ dustcap and a double-wound voice-coil. Its free-air resonant frequency is 28Hz, and while the sealed woofer enclosure can be expected to raise that number somewhat, the effect is tempered by the presence of an additional bass driver in the same enclosure: an actively driven, rear-firing 10″ cone whose effect on the speaker’s bass system is similar to that of a passive radiator. The supplemental woofer’s upper-end response is limited to 55Hz, largely because its long-fiber cone is damped by the addition of a disc of MDF some 5.5″ in diameter. I’ve always believed that if a big piece of wood can’t be counted on to slow a fiber woofer cone, nothing can.

The construction quality of the 2Ce Signature II is remarkably good for the price. Driver enclosures are made of 0.75″-thick pieces of MDF, shaped on a CNC milling machine and assembled using a combination of fasteners and adhesives. MDF bracing is abundant, as are strategically placed bits of wool felt, to further tame sound diffraction. Except for the drivers and the felt, all of the interior surfaces are sprayed flat black, to keep them more or less invisible through the grille—shades of the Quad ESL—yet the level of finish is decent enough that the inner cabinets, stripped of their grilles and loosed from their moorings, wouldn’t look out of place in certain rooms. Such as mine.

But you needn’t. Instead, the essential cabinetry of the Vandersteen 2Ce Signature II is topped and bottomed with MDF plinths, themselves capped with nicely oiled veneers. The plinths are joined with four wooden dowels, 1.25″ in diameter and just over 37″ long. The dowels comprise the frame around which a black double-knit grille sack is wrapped, tightly and permanently: Like a shear bolt or a deer tick, you can’t remove it without destroying it. But you needn’t.

Installation and setup
Vandersteen Audio supplemented my 2Ce Signature II review pair with their sand-filled bases, a $125/pair option whose primary purpose is to stabilize each shallow enclosure with two thick, spiked feet at the front and a third one at the rear, about 5″ beyond the enclosure’s rear edge. The rather long, threaded spikes also provide some small measure of tilt, where needed; I took advantage of that, to compensate for the fact that my ears are slightly farther from the floor than average. I did it with Richard Vandersteen’s blessing—and, for that matter, with Richard Vandersteen’s assistance, when he dropped by for a visit in September of 2006.

While he was here, Vandersteen agreed that my review speakers performed best when placed about 56″ from the wall behind them and about 16″ from their respective sidewalls: Unlike my Quads, the Vandersteen 2Ce Signature II needs to be kept away from all room boundaries. We used my Audio Control Industrial SA3050A spectrum analyzer to get it right—Vandersteen uses the same model himself, as it turned out—and while deep-bass response was a bit weaker than specified at 6dB down at 31.5Hz in my room, there was useful output in the bottom octave. It’s important to note that the deep-bass response of the 2Ce Signature II rolled off very gradually, not with the steep, now-you-hear-it-now-you-don’t dropoff associated with other bass-loading schemes.

During their stay here, I used the Vandersteens with a variety of amplifiers, ranging from my 21W Lamm ML2.1 monoblocks (it was Vandersteen’s idea—honest—and we were both surprised at how fine the combination sounded on 98% of the material we played) to the 200Wpc i-7 integrated amplifier from Simaudio (review to come). I also used a variety of cables, and discovered two things of no small importance.

First, the 2Ce SigII is equipped with separate low- and high-frequency inputs, to facilitate biwiring or even biamping. That in itself doesn’t seem extraordinary, but the prospective owner should know that Vandersteen recommends single-wiring only as a temporary measure—and so much so that low-to-high-frequency jumpers aren’t even included (although the excellent owner’s manual contains instructions for making your own).

Second, in upgrading the 2Ce to Signature status a while back, Vandersteen dispensed with the usual oversized speaker connectors, for their susceptibility to skin effects and eddy currents (see “Listening” columns passim) and their overall high levels of ridiculousness. Instead, he opted for a single barrier strip of small, gold-plated screw terminals. I share his point of view—even as the limited connection option forced me to scramble a bit and modify a few of my own cables to fit.

You can find out more about which cookies we are using or switch them off in settings.

This website uses cookies so that we can provide you with the best user experience possible. Cookie information is stored in your browser and performs functions such as recognising you when you return to our website and helping our team to understand which sections of the website you find most interesting and useful.

Strictly Necessary Cookie should be enabled at all times so that we can save your preferences for cookie settings.

If you disable this cookie, we will not be able to save your preferences. This means that every time you visit this website you will need to enable or disable cookies again.