The X14, has been fitted with a new 14cm long-throw mid/bass driver for greater depth and power (we think you might be surprised by its punch), while the short distance between it and the 28mm coated soft-dome tweeter offers improved timing. The X14 is versatile enough to put on stands, bookshelves or sideboards.

These little boxes will set your music free!

Recently I took home a pair of Dynaudio’s pint-sized Excite X14 speakers. Over the course of a few weeks I listened to dozens of favorite tracks on CD and vinyl, marveling at the X14s’ detailed, lively presentation. Depending on the recording, the big three-dimensional soundstage sometimes extended from wall to wall and floor to ceiling. I can’t remember another speaker that makes listening so much fun.
KEEP READING 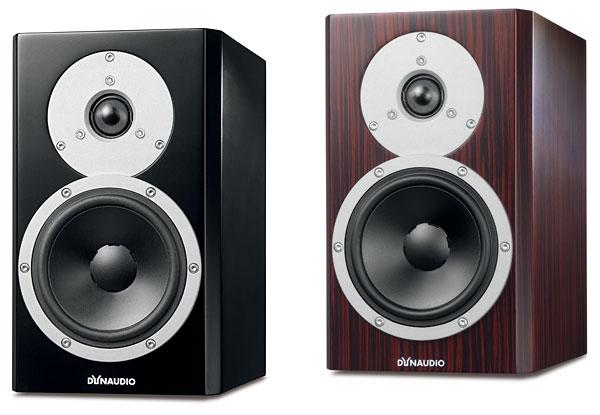 In the March 2010 issue I reviewed Dynaudio’s Excite X12 bookshelf speaker ($1200/pair), then the least expensive speaker in Dynaudio’s line. It mightily impressed me, and I wrote that it had “become my new benchmark for speakers costing under $2000/pair.” Despite the many newer, competing bookshelf speakers costing somewhere between $1000 and $2000/pair that have visited my listening room since then, my enthusiasm for the Excite X12 has not waned—I’ve used it as a reference against which to compare all of those of those models. So when Dynaudio USA’s Michael Manousselis contacted Stereophile to tell us that the entire Excite line had been redesigned, and offered review samples of the Excite X12’s successor, the Excite X14 ($1500/pair), I jumped at the opportunity.New Design
Except for its grille, the two-way, rear-ported Excite X14 looks identical to the two-way, rear-ported Excite X12. (The X14’s grille is attached with concealed magnets, the X12’s with plastic snap locks.) The 1″ fabric-dome tweeter in both models features a proprietary Precision Coating that Dynaudio declines to describe. In the X14, however, this coating is applied by a high-precision machine that allows it to be deposited more evenly than was possible in the X12. Like the X12, the X14 has a long-throw, 5.7″ woofer with a small, lightweight voice-coil. However, in the X14, the spider suspension and voice-coil have been redesigned to improve headroom and the accuracy of the cone’s motion. The tuning of the bass port has been refined, and the crossover is a new design trickled down from Dynaudio’s more expensive Focus line.Finally, while the X12 was a 4 ohm design, the X14 is a truly linear 8 ohm design, in an attempt to make it an easier speaker to drive—the X14 will draw less current from the amplifier.The Excite X14 is available in real-wood veneers of walnut or rosewood, as well as lacquer finishes of Satin Black or Satin White. I found the tiger-striped rosewood of my review samples particularly sexy.To listen to the X14s, I set them on my Celestion Si stands and left their grilles off; I felt that the latter revealed a tad more detail. 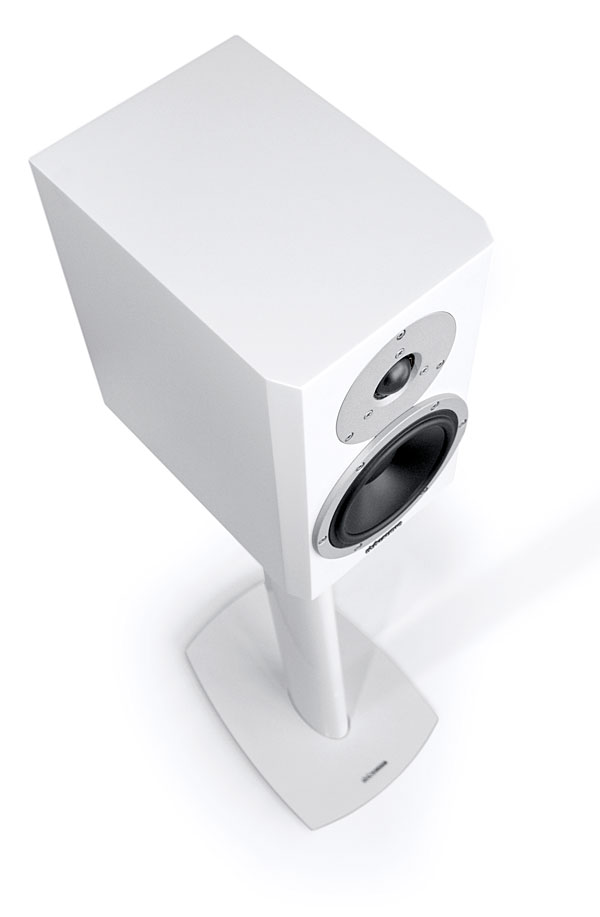 Sound
The Excite X14s’ dead-neutral, detailed, and holographic midrange made them a perfect showcase for well-recorded voices. In “The Losing End (When You’re On),” from Neil Young’s Everybody Knows This Is Nowhere (LP, Reprise RS 6349), Young’s voice was silky, every sibilant reproduced with crystal clarity and no trace of spittiness or harshness as it floated on a bed of air above the interplay of Billy Talbot’s bass and Ralph Molina’s drums. Higher in the audioband, the upper-register melodies in “Donatella,” from Lady Gaga’s ArtPop (CD, Streamline/Interscope B0019295-02), were reproduced with an airy sense of body over a foundation of electronic instruments. Woodwinds were equally intoxicating. In Seven Standards 1985, Volume 1, master composer and reed player Anthony Braxton deviates from his usually abstruse original work, cranking through straight-ahead covers of jazz standards (LP, Magenta M0-0203). Through the Excite X14, his slightly forward alto sax was vibrant and lyrical, and the speaker was able to reveal every subtlety of his unique phrasing.

The X14’s reproduction of high frequencies was extended, pristine, uncolored, and delicate with all recordings I listened to. The many colors of Bill Frisell’s electric guitar in an early (1987) recording, The Paul Bley Quartet (LP, ECM 1365), were easy to dissect throughout his instrument’s entire register. Miles Davis’s trumpet in Workin’ with the Miles Davis Quintet (LP, Prestige P7166) had the requisite bite of burnished brass throughout its upper register, and his rich melodies bathed the rhythm section in a golden glow. The acid test of a speaker’s high-frequency capabilities is its reproduction of the strings in a good recording of a baroque chamber ensemble. The massed violins in Vivaldi’s Concerto for Two Trumpets in C, RV 537, from the Academy of Ancient Music led by Christopher Hogwood (LP, L’Oiseau Lyre DSL 0544), sounded extended and airy, and revealed an ideal and delicate balance of bowed string bite and silky seductiveness.

Very impressed with the Excite X14’s bass performance throughout a wide range of recordings, I mined my collection of jazz vinyl for bass solos. My notes for Paul Chambers’s solo in “The Theme Take #1,” from Miles Davis’s Workin’, and for Scott La Faro’s solos in Bill Evans’s Live at the Village Vanguard (LP, Riverside RS 3001), read the same: “clean, clear, warm, and resonant.” But these little bookshelfs were also quite capable of handling dramatic passages in the lower bass. The opening organ-pedal motif in Philip Glass’s score for Godfrey Reggio’s film Koyaanisqatsi (UK LP, Island ISTA 4) was blooming, airy, and powerful, with no overhang or loss of definition in the lower notes.

I’m quite taken with the interesting synth patch Lady Gaga uses for the bass line in “Donatella.” It has an organic and intoxicating yet artificial buzzy quality, and the Dynaudio untangled its unique textures with clarity.

And for its price, the Dynaudio did a spectacular job of laying out inner details. It unfurled the blockbuster recording of Krzysztof Penderecki’s Polskie Requiem, with Antoni Wit conducting the Polish Radio Symphony Orchestra (LP, Polskie Nagrania Muza SX2319/20). In the mid-1980s, a year after this recording was made, I heard, from a choice seat at Carnegie Hall, the composer and the Cracow Philharmonic perform it in what became one of the three best concerts I’ve ever heard (footnote 1). This long work features dense, complex vocal and instrumental textures replete with subtle dynamic inflections and dissonances that resolve into beautifully simple sonorities. Throughout, some of the hairier choral parts are very difficult for a speaker and/or phono cartridge to make sense of. (My Clearaudio Virtuoso Wood perfectly tracked the entire LP.) But the Dynaudio was able to precisely resolve each nuance of even this work’s most complex passages.

The Excite X14 resolved all transients with lightning speed, and with no trace of edge or blunted attacks. The rapid-fire electronic blasts from Laibach’s Nova Akropola (LP, Cherry Red BRED 67), and singer Milan Fras’s guttural growl, were clean and crisp. In the title track of Metallica’s Master of Puppets (LP, Elektra 60439-1), the speaker resolved all of the subtleties of the delicate acoustic-guitar introduction, and didn’t smear a drop of the gut-slamming fortissimo speed-metal passages in the rest of this track. 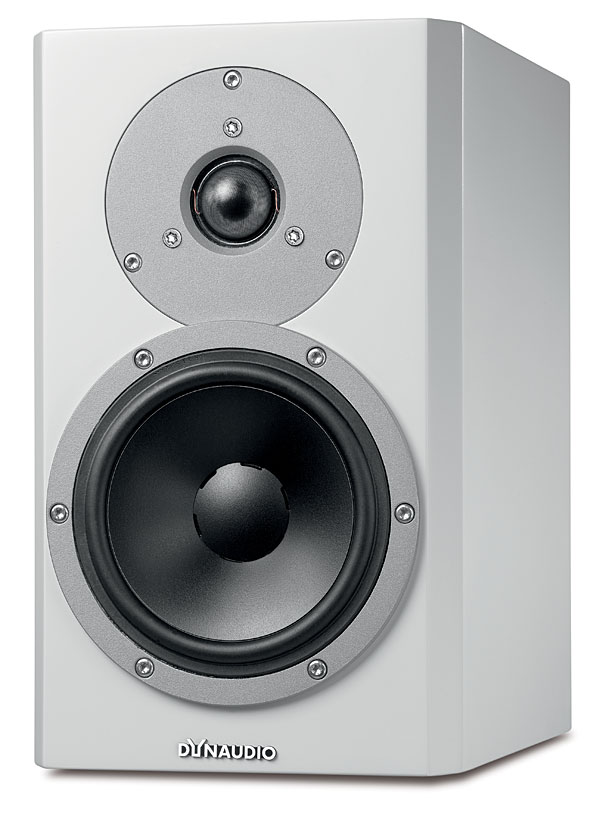 I was very impressed with the wide dynamic contrasts the Excite X14 was capable of. Playing “Starless,” from A Young Person’s Guide to King Crimson (LP, Editions EG KC10), the speaker revealed the entire dynamic range of ppp to fff in linear and organic fashion. Although I thought I knew this track intimately, I realized for the first time that it has the dynamic capabilities of a typical classical orchestral work.

And these little bookshelfs were great rock speakers—they had no problem ripping it loud if I wanted them to. I put on the greatly underrated, eponymous first album of the Vanilla Fudge (LP, Atco SD33-224)—it was way head of its time—cranked up their unique arrangement of Holland-Dozier-Holland’s “You Keep Me Hanging On,” and reveled in the crisp, coherent dynamics and heavy slam of the rhythm section, bathed in Mark Stein’s distorted Hammond B3. And my high-volume spin of Jeff Beck’s Beck-Ola (UK LP, EMI 8 55665 1) reproduced the rhythmic interaction of Beck’s guitar, Ron Wood’s bass, and Tony Newman’s drums with perfect coherence. My notes read: “Pow! Sock! In the pocket!” Finally, I cranked up to 11 My Bloody Valentine’s first album, This Is Your Bloody Valentine (LP, Creation CREEEP 060)—the band’s name should be My Bloody Eardrum—and let my entire house bathe in the sustained wash of distorted guitars.

The Excite X12 had a richer lower midrange but less midrange detail, and its highs were less delicate and less detailed. The X14’s high frequencies were cleaner and more articulate in high-level passages. The ability of either Dynaudio to articulate sounds at low levels was excellent; I heard little difference between them. The X14’s midbass was much cleaner and clearer than the X12’s, which sounded a bit sluggish and warm by comparison. At first I thought the X12’s bass went a bit deeper than the X14’s, but I believe that impression may have been created by the older speaker being slower and less articulate in the bass. I look forward to seeing John Atkinson’s measurements of the bass extension of the two Excite models.

The Epos Elan 10 had clean, clear, deep bass and excellent midrange detail. Its highs, however, were less detailed and less delicate than the Excite X14’s. The Epos’s articulation of low-level dynamics was almost as good as the Excite X14’s, but the Elan 10’s ability to produce high-level dynamics and slam was the best of the three.

Wrap-Up
With the Excite X14, Dynaudio has taken all of the aspects of the Excite X12 that I liked and improved them across the board. At $1500/pair, this speaker is an extraordinary value. It has become my favorite bookshelf speaker for under $2000/pair.

Footnote 1: The other two, both from the same time period, were: 1) John Zorn conducting a 25-piece ensemble in his arrangements of works by Ennio Morricone. Imagine guitarists Bill Frisell, Fred Frith, Arto Lindsay, and Robert Quine, and drummers Anton Fier and Bobby Previte, all onstage at the same time! 2) The Talking Heads’ Stop Making Sense Tour. The night after that performance, I bought another ticket and saw the show a second time.

What’s in the box: