Canton showed off the first of its new flagship “Reference” line of high-end loudspeakers at CES. With the introduction of the Canton Reference 3.2 DC high performance full-range loudspeaker, the company also launched its first ceramic dome tweeter which is linear to 38.5kHz.

Menu
I was greatly impressed by the performance of the Canton Reference 9.2 DC loudspeaker, which I reviewed in the March 2008 “Music in the Round” in the context of a 5.1-channel system. Those beautiful jewels not only sounded balanced and transparent, they had more sheer grunt in the low end than could be reasonably expected from their size. I wanted to hear more from Canton, but couldn’t decide whether to go up in size or down in price. The problem I’ve always had with Canton is that they offer such a wide range of products that it’s like choosing food from a multipage menu at a fine restaurant: everything looks good. It’s especially difficult when your hunger is further piqued by your own past experience and the recommendations of others. (Check out the November 2006 issue to learn how much Wes Phillips enjoyed Canton’s flagship speaker, the Reference 1 DC.) 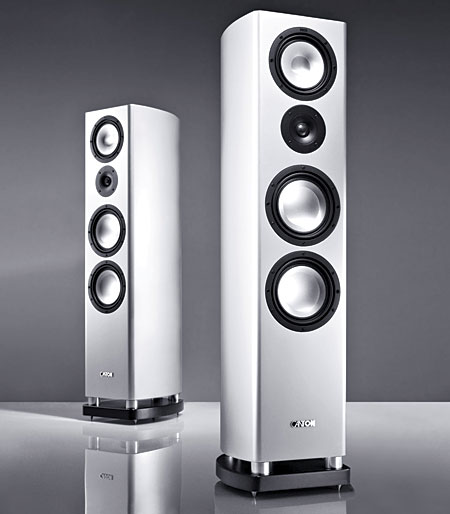 So I figured I’d see what Master Chef Frank Göbl, Canton’s head of research and development, had done in whipping up my favorite dish: a high-end, floorstanding, three-way speaker similar to those I’ve reviewed that have already delighted my aural palate, such as the Pioneer S-1EX (March 2007), the Revel Ultima Studio2 (March 2008), and the B&W 802D (December 2005), the last still resident here. Hey, I think I know what I like!There are four main ingredients in Canton’s Reference 3.2 DC ($16,000/pair): 1) a five-layer monocoque construction in which each layer of high-density fiberboard is carefully preformed, then bonded to the other layers to maximize rigidity and stiffness; 2) a 1″ composite-dome tweeter with an extended frequency response (to 38kHz, ±6dB) and, to widen its dispersion, an overhung voice-coil in a flared transmission baffle; 3) aluminum mid- and low-frequency drivers with Triple Curved Cones (TCC), their profiles integrated with those of the concave dustcap and the surround to optimize stiffness and dispersion; and 4) a mechanically isolated crossover with symmetrical 12dB/octave filters at 220Hz and 2.8kHz. In addition, like all Reference-series speakers, the 3.2 includes Displacement Control (DC) technology, which implements a custom high-pass filter that extends the linear low-frequency response while simultaneously curtailing out-of-bandwidth cone excursion. A full description of the technology and designs of the Reference series is accessible at Canton’s Reference website.

Appetizers
The hand-assembled Reference 3.2 DC is beautiful. The review samples were finished in a luscious cherry, and while they’d already passed through the hands of other reviewers, the veneer still glowed attractively. They stand tall, the four drivers arranged vertically: in descending order, the midrange, tweeter, woofer, and woofer. The cabinet’s width tapers gracefully from front to rear. A substantial wood-like grille panel, covered in black fabric, is attached with small metal studs, but no holes or mounts are visible when the grille is removed. Canton has cannily machined the receiving holes into the metal frames of the drivers and anodized them so that they can’t be seen. It makes reattaching the grille a little tedious, but the visual effect when they’re removed is more than worth the bother.The narrow rear panel sports two pairs of sturdy gold-plated multiway connectors. I removed the provided jumpers and attached the 3.2 DCs to my McIntosh MC303 three-channel power amp with shotgunned AudioQuest Mont Blanc DBS biwire cables. Although no port is visible, the Canton’s main cabinet is supported a precise distance above the piano-black base plinth by four sturdy, silver-colored cylinders; its port fires downward into this controlled space.When the Cantons were delivered, it was suggested by Gordon Sell, Canton’s PR representative, that I first position them with little or no toe-in. That’s just what I did, after putting them in the spots just vacated by the B&W 802Ds, and before them, the Revel Ultima Studio2s. Though these are the best spots in my room for bass with all of these speakers, each pair has required subtle adjustments of position to optimize the imaging and low-frequency reproduction. The 3.2 DC’s low-frequency extension was immediately apparent—perhaps too apparent—and I liked their sound better when they were placed about 2’farther apart than their predecessors. I gradually increased the toe-in angle over the first few weeks of listening; the soundstage didn’t fully snap into focus until each 3.2 DC was toed in by about 15°.

Entrée
The Reference 3.2 DC was clearly a wide-range speaker of great transparency. I began with Eiji Oue and the Minnesota Orchestra’s spectacular Exotic Dances from the Opera, now reissued on SACD (Reference Recordings RR-71SACD). From a firm and potent bass drum through a clean midrange to incisive treble percussion, all seemed near ideal. When I moved on to the small jazz ensemble on Oscar Peterson Meets Roy Hargrove (CD, Telarc CD-83399), and then to John Hammond’s solo performances on Rough & Tough (SACD/CD, Chesky SACD346), I got the same impression: this was a really great pair of speakers that could do it all.